1. Hamas reached a deal with Egypt to stop the Gaza clashes from escalating. According to Israel HaYom, the Egyptians came down hard on Hamas after learning of Iranian and Qatari meddling to keep the Gaza fires burning.

The Saudis accused Qatar of helping Hamas instigate border riots through its envoy to the Gaza Strip, Mohammed Al-Emadi, saying Qatar’s assertion that it was key to convincing Hamas to roll back the riots was false.

“Contrary to reports on Qatari mediation, their role was negligible, effectively nonexistent,” the Egyptian official noted. “Qatar is beginning to show more and more that it represents the interests of Iran. Following the intelligence that was gathered on Iranian involvement and support for the violent incidents on the border with Gaza, causing the deaths of dozens of Palestinians, there was no place for Qatar to mediate between the parties and try to improve their image in the Arab and Western world at the expense of Palestinians killed and wounded.”

Join us. Make a difference.

2. Did Turkey violate a UN Security Council resolution by purchasing Israeli electronics and then reselling them to Iran? Ynet reports that it all began when the United Arab Emirates intercepted a shipment of electronic capacitors that are banned for export to Iran because they could be used in Tehran’s nuclear program. The capacitors were manufactured by the Jerusalem-based Celem Power Capacitors.

A spokesman for Celem said that “if the shipment did find its way to Iran, the Turkish buyer misled us.” Ynet’s report didn’t identify the Turkish purchaser.

3. While the world was preoccupied with bashing Israel, Syrian and Russian forces launched a large-scale attack on the Yarmouk Palestinian refugee camp. The Daily Telegraph reports that this offensive against Islamic State jihadists includes air strikes and surface-to-surface missiles. Can you imagine the outrage if Israel did this?

Air strikes have levelled more than 60 per cent of the camp in the last few weeks, leaving the civilians that remain trapped in uninhabitable conditions.

4. Gaza Border Coverage: Shame on the Media: With the Hamas claim that 50 of the Palestinians killed in Gaza clashes were its operatives, will the international media climb down from their knee-jerk assault on Israel?

Israel and the Palestinians

• Paraguay to open new embassy in Jerusalem on Tuesday. President Horacio Cartes will be flying in to attend next week’s inauguration.

• The IDF launched overnight airstrikes and tank fire on several Hamas targets in retaliation for heavy machine gun fire from Gaza on the Israeli city of Sderot and on soldiers along the border. More at the Jerusalem Post.

• Per Ynet, a Hamas operative who was apprehended while trying to infiltrate the border told Israeli interrogators that Hamas deliberately tricks women and children into approaching the border fence in the hopes they’ll be killed.

“Hamas organized the protests in order for people not to ‘turn’ on them. They (Hamas) say: Instead of them harming us and ‘turning’ on us, we’ll send them to the border fence where they will be hit,” he told his investigators.

• Swiss foreign minister: UNRWA is part of the problem. Here’s Ignazio Cassis in his own words:

“It provides ammunition to continue the conflict. For as long as Palestinians live in refugee camps, they will want to return to their homeland,” he said. “By supporting UNRWA, we are keeping the conflict alive.”

• The death of an eight-month-old Palestinian baby, Layla Ghandour is certainly tragic. Unaddressed in this 1,264-word Los Angeles Times dispatch is why Palestinian parents bring babies (in this case with a heart defect) to a clash where they know tear gas and smoke from burning tires would be in the air? A similar New York Times report shed just a little more light on the question:

Layla was dozing at their home in Gaza City when a call went up: A bus was waiting, outside a nearby mosque, to take residents to the border fence, where the protest was raging. Her 12-year-old uncle, Ammar, bundled her up in his arms and carried her out the door.

The boy assumed that Layla’s mother was already on the bus. In fact, she was in another part of the house, suffering from a toothache. Still, Layla was hardly the only infant at the protest. Entire families had come along, some snacking on ice cream or sandwiches, as the protests raged hundreds of yards away.

• You don’t often see journalists apologize so openly and unequivocally, but the Jewish Chronicle’s Daniel Sugarman says he’s ashamed of his recent column criticizing the IDF’s defense of the Gaza border. Specifically, Sugarman says he realizes that the issues of using lethal and non-lethal force in such circumstances are more complicated than he realized, and that he didn’t offer any credible solution himself:

But the criticism I paid more attention to was from people who pointed out that it was absurd to deal in hypotheticals. I’d said that surely there must be a way the protestors could be stopped without shooting live ammunition at them – that Israel, with its incredible technological capabilities, must be capable of developing a way. That was a cry of anguish, but it was not an argument. If no such technology currently exists, then it was absurd of me to blame the IDF for not magically willing it into existence. The traditional crowd stopping technology would not have worked effectively. Rubber bullets are only short range. The same with water cannons. And with tens of thousands of people rushing the border, this would have been extremely unlikely to work effectively. The border would have been broken through. And then, without much of a doubt, a lot of people in Israel would have died. That was, after all, Hamas’s stated aim.

• Israel completed the building of a “smart fence” around its new civilian airport. The Jerusalem Post reports that Eilat Ramon International Airport is now protected by a 26 meter high barrier which “features electronics, sensors and detection technology.” The Ramon airport, located 19 km north of Eilat, is due to open in March, 2019 and is expected to handle two million travelers a year.

• The US placed additional sanctions on Hezbollah’s top leadership.

• From the poison pen of Washington Post cartoonist Tom Toles, who woefully oversimplifies the Gaza conflict. Hamas made sure Palestinians died in order to manipulate world opinion — including Toles’. 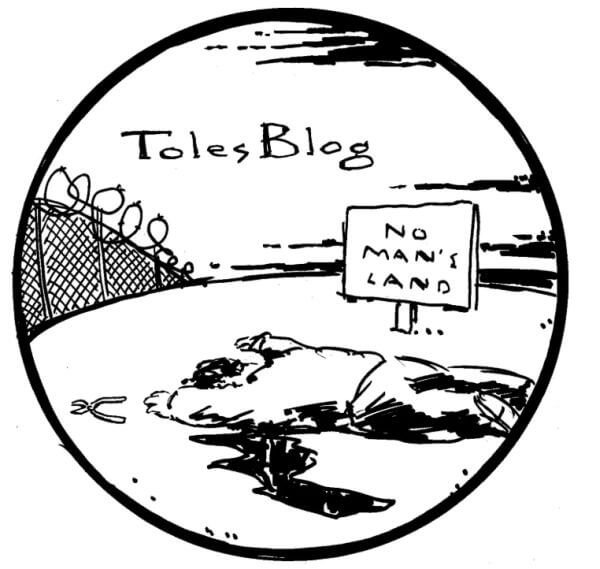 The facts on the ground in the #Gaza violence this week, were so different to what we saw in the press.#Israel is fighting against the media, as much as terrorism itself. pic.twitter.com/aQDU5D6J0W

– Bret Stephens: Gaza’s miseries have Palestinian authors
– Rabbi Eric Yoffie: If Gaza death toll is ‘disproportionate,’ how many Israelis must die for the sake of symmetry?
– Kinley Tur-Paz: I was at the Gaza border, we did all we could to avoid killing
– David Horovitz: World must tell Gaza’s Hamas-abused masses the truth: There will be no ‘return’
– Hen Mazzig: What I hear when I hear diaspora Jews on Gaza
– Thane Rosenbaum: Why Gaza is no Selma
– Greg Sheridan: Trump’s embassy move injects some realism into the Middle East
– Ross Rosenfeld: Liberals should support Trump’s Jerusalem decision

Hey, international community! Since you refuse to listen to reason on this issue, will you at least listen to Hamas, admitting 50/62 killed in #Gaza border clashes were Hamas operatives? Pretty please with a biased cherry on top? https://t.co/RK8nFaha1U

– Yoram Schweitzer: Hamas planned and predetermined the Gaza tragedy
– Terry Glavin: Hamas is brutally putting Israel in an impossible situation, and Israel will have to adapt
– Ben-Dror Yemini: The Palestinians’ self-made Nakba
– Max Boot: Don’t blame the embassy opening for the violence in Gaza. Blame Hamas.
– New York Daily News (staff-ed): Terrorists are chiefly to blame for the tragic loss of life in Gaza
– Gregory Wallance: The Hamas-led clashes at Gaza-Israel border are not a peaceful civil rights protest
– Jonathan Schanzer: For Gaza’s suffering, blame Hamas
– Alex Fishman: The Gaza battle isn’t over yet
– Lt. Col. (ret.) Jonathan D. Halevi: Why is Hamas so interested in Palestinian deaths
– Seth Frantzman: The complex, and often toxic Israel-Turkey relationship
– Oded Granot: Turkey: An eye for an eye

• For a sense of what the critics are saying, see Moustafa Bayoumi, Sarah Helm, Maya Ilany, Nathan Feldman, and a Sydney Morning Herald staff-ed.

Join us. Make a difference.

While you’re here, help us continue producing the analyses, articles, videos and hot news reaching thousands of viewers and holding the media accountable. Support us by Donating Here

Before you comment on this article, please remind yourself of our Comments Policy. Any comments deemed to be in breach of the policy will be removed at the editor’s discretion.

The post Iran and Qatar Meddling in Gaza Clashes? appeared first on HonestReporting.