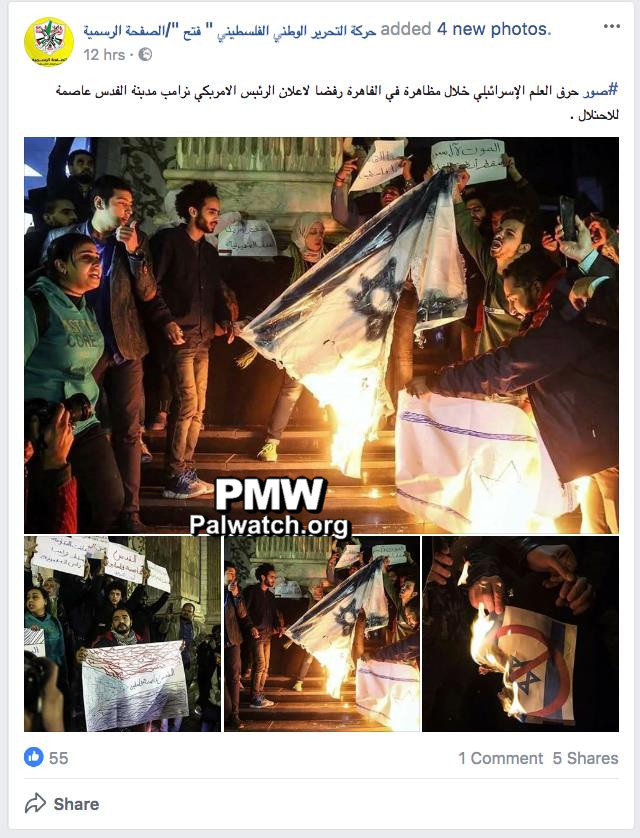 Pictures and text posted on the official Fatah Facebook page

The pictures show Israeli flags being burned and signs held at a demonstration in Cairo following US President Donald Trump’s speech in which he recognized Jerusalem as the capital of Israel.

Posted text: “Pictures of burning the Israeli flag at a demonstration in Cairo that rejects US President [Donald] Trump’s statement that Jerusalem is the capital of the occupation.”

Text on signs:  “Jerusalem the capital of Palestine – death to Israel!”
The resistance lives, Trump will fall – patron of the Zionists!”
“America will fall!”

US recognition of Jerusalem as capital of Israel – On Dec. 6, 2017, US President Donald Trump gave a speech formally recognizing Jerusalem as the capital of Israel and stating that he had instructed the State Department to begin preparations to transfer the US embassy from Tel Aviv to Jerusalem. Trump concluded by stating that the US is still fully committed to the peace process in the Middle East. Following his speech, Trump signed the waiver to delay the transfer of the embassy, and apparently will continue to do so until preparations for the transfer have been completed.